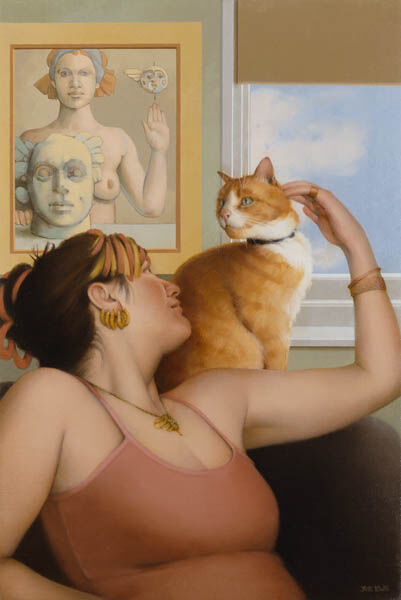 When and why did you start incorporating cats into your work and what do you feel they bring to it?

Cats first appeared in my work in 1990 when I did two paintings that featured my own beloved ginger and white cat Tybert. The first is entitled The Ship of Fools where he appears as part of a large composition amongst human figures in a boat; and the other is a fantasized self-portrait (when very much younger than now) with him entitled Tybert The Cat which was used on the cover of The Book of Cats published by Bloodaxe Books. Before this all my compositions were of and about the human figure, but after these two pictures cats and other animals appeared with increasing frequency. Some of my depicted cats are in unlikely costume, others are cat-masks or dolls, others still just happen to be there as a woman’s companion or with an arrangement of objects. They lend beauty, sensuality and inscrutability to a composition.

Are there any works of art by other artists featuring cats that have inspired you? If so which work and where did you encounter it, how did it make you feel?

A painter of the 20th century that I very much admire is Balthus, whose works have the timeless quality of the ancient frescoes of Pompeii. Cats occasionally make an appearance in his pictures, and the first that I remember seeing is one entitled The Room (1952-54) which I saw when I was a student as part of a slide show in a history of art lecture. The composition is atmospherically strange, in which a diminutive person has drawn back the curtain from a window to let light flood over a nude girl sprawled on a chaise longue, and to one side of the window sits a cat on a small table who has turned its head to observe the scene. It evokes a kind of drama of stillness tinged with the surreal, and the image has stayed with me during all the following years. Another memorable Balthus painting is Nude With A Cat (1949-50) in which a similarly posed young woman reaches back to touch a smiling cat.

What process do you go through to create your work? What inspires you?

I currently work in oil on canvas and various drawing media, and I also work in pastel, as pastel paintings rather than drawings. For me, oil painting has a richness and luminosity unequalled by other paint media, and I love its versatility and subtlety.

An idea can gestate for weeks or months or even years before I use it in a composition. Some ideas may never be used. I keep small sketchbooks with plans for future works, usually in the form of simple line and wash drawings, sometimes as written notes. When preparing a painting I work up an idea in outline drawing to the full size of the canvas (called a cartoon) before I begin laying on paint, and it inevitably changes and takes on a life of its own during the painting process. My technique is influenced by early Italian and Northern European painting, but there are many other kinds of art and artists that interest me and which have informed my own style. I am inspired by the human-animal connection in the modern world, that is to say by all creatures and their relationship to each other.

What might people be surprised to know about you (or your work)?

That I am an animal rights activist, and I believe passionately in the acknowledgement of sentience in all living beings. As well as trying to convey this through some of my work, I actually get out on the street from time to time to engage with members of the public on this issue.

That rats, as well as cats, are among my favourite animals.

What question do you wish I had asked you?

Do you believe that cats are equal or even superior to humans?

What is your answer to that question?

Yes, probably superior. They surpass us in beauty, instinct and elegance. As do most other animals.