Previous
Next
A full transcript of the narrative for a video. 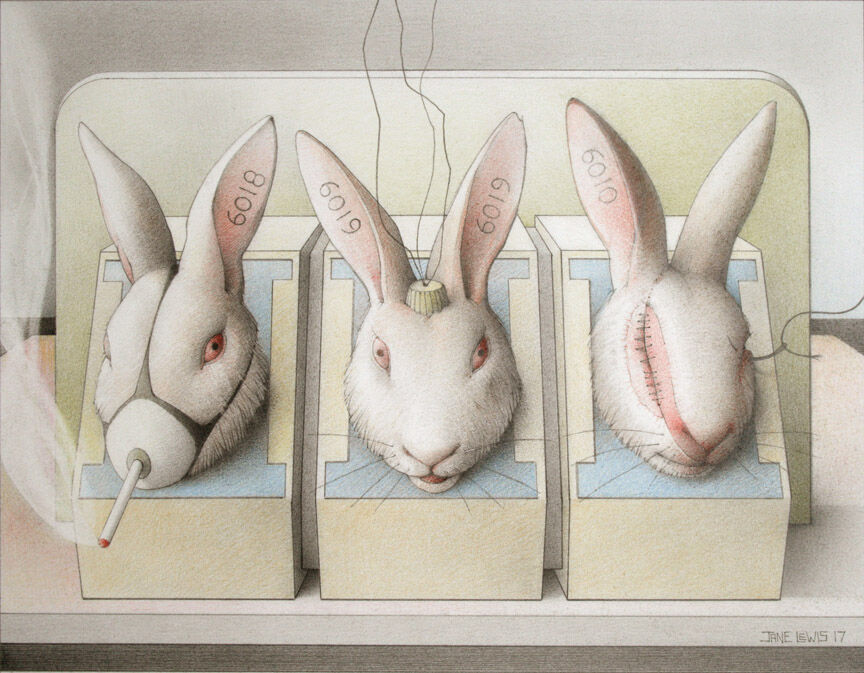 This is the unedited narrative to a video which features images from Jane Lewis's Earthlings series of drawings, and is part of a collection of short films produced by Agitate Art
(to view, go to VIDEO gallery)

These images are part of a series of drawings entitled Earthlings, that I did in response to the documentary film of that name.
Watching Earthlings changed my ethics, the way I live and my work as an artist.

I became vegan – and it was like awakening to a strange dystopia of violence against animals, and so I felt compelled to depict them in all their beauty and tragic suffering in order to try to change attitudes.
I believe that my role as an artist is to confront, question and unsettle.
I try to give each individual I portray a certain dignity and poignancy, while at the same time not disguising the harrowing nature of their suffering.

These particular drawings depict the torture, suffering and indignity inflicted on other sentient beings in order to test products for commercial and medical research, such as cosmetics, toiletries, cleaning products, drugs (including recreational drugs such as tobacco and alcohol), pesticides, food additives, electro-convulsion, and a variety of medical and military procedures.
Vivisection is always dependent on the exploitation, suffering and death of animals.

Rabbits are widely used in eye and skin and also respiratory tests for consumer products, and endure untold suffering for the beauty industry. They are kept in restraints called stocks so that chemicals can be dripped in their eyes or spread on their shaved and lacerated skin.
Rabbits have no tear ducts, so unlike humans, their eyes cannot wash out harmful substances. This means that the rabbit’s eye is exposed to more of the test chemical for longer periods.

Across the world each year, tens of thousands of monkeys are used in research, to develop and test the safety and effectiveness of potential human medicines and vaccines. They are also used to study how the brain functions and in research relating to human reproduction.
Among other research atrocities, primates are used for head-injury simulation.

Beagles are a favoured dog breed for toxicology studies, in which the dogs are slowly poisoned. They are considered neither too big nor too small, and therefore easy to handle, and are trusting and loyal. Ideal subjects for ruthless scientific exploitation.
Among other poisons, they have been used to test tobacco and e-cigarettes.
Like all animals, they develop severe psychological distress in the laboratory – and this is referred to as “stress-induced psychosis”.

Millions upon millions of mice and rats are killed in laboratories every year. They are abused in everything from toxicology tests, to painful burn experiments, to psychological experiments that induce terror, anxiety, depression, and helplessness. They are electro-shocked in pain studies, are mutilated in experimental surgeries, and have cocaine, amphetamine and other drugs pumped into their bodies. They are given cancerous tumours and are injected with human cells in genetic-manipulation research. Rats have holes drilled into their skulls for invasive brain experiments.

We are all earthlings, every one of us, along with every other living thing on this planet, and if humanity thinks that it owns the planet and its inhabitants it does so at its peril.

My friend and mentor, artist Jacqueline Morreau said:
We have only a small space of time in which to make our marks on paper and canvas, to effect permanent changes in society before the barbarians once more close in … We must work harder than ever to make what gains we can in the consciousness of civilized people.