Previous
Next
The inspiration and meaning behind the composition of a painting. 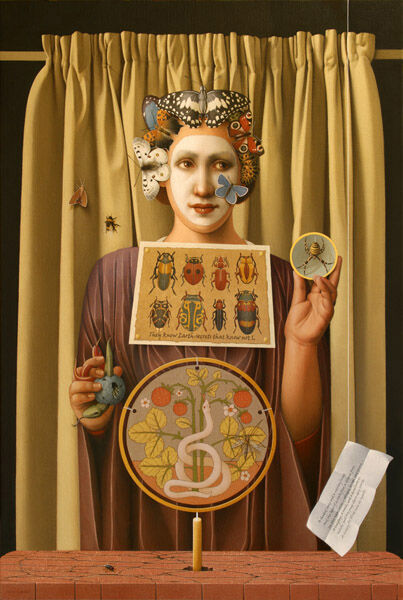 I painted this picture during the first six months of lockdown in 2020. It took six months to complete – more than that if drawing and planning are included. Two days after I finished it, I fell and broke the wrist of my dominant (right) hand, and so the accumulation of new ideas jotted down in notebooks during my long sojourn with Small Creatures would take a while longer to begin to be realized.

It is a homage to the insects and other small creatures, including spiders and small reptiles, that are in catastrophic decline due to human activity, in the form of habitat destruction, intensive agriculture, the use of pesticides, urbanization and industrialization, introduced species and climate change. Insects are among the most abundant and diverse species on the planet and play key roles, from aerating the soil to pollination and recycling of nutrients. Their decline is a grave cause for concern - it impacts us all as well as all wildlife. Insects pollinate three quarters of our food crops, as well as being the main food source for many birds, small mammals and fish. 87% of all plant species require animal pollination, most of it delivered by insects. The stark fact is that we need insects and if we don’t act now, and act decisively, future generations will not be able to enjoy butterflies, moths, ladybirds, pond skaters, dragonflies, ground beetles and bumblebees. Our ability to feed ourselves will be compromised and many of our beloved birds, mammals and other species will simply not survive.

My painting includes extracts from a poem by Thomas Hardy, written in 1899 when insects and other wildlife were still abundant.

A shaded lamp and a waving blind,
And the beat of a clock from a distant floor:
On this scene enter - winged, horned, and spined -
A longlegs, a moth, and a dumbledore;
While ‘mid my page there idly stands
A sleepy fly, that rubs its hands.

Thus meet we five, in this still place,
At this point of time, at this point in space.
My guests besmear my new-penned line,
Or bang at the lamp and fall supine.
“God’s humblest, they!” I muse. Yet why?
They know Earth-secrets that know not I.