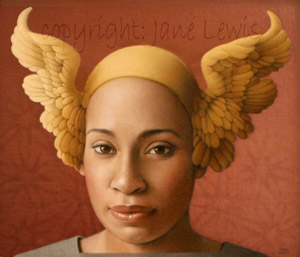 Two threads running through a number of the pictures in the exhibition are music and symbolism.

The centre-piece of this exhibition, and the largest canvas, is called Unicorn and shows two young women with a sculpted unicorn with child rider. One woman holds a mandolin, the other opens a lidded container to reveal a bubble. It is a kind of allegory of the senses, and an arrangement of symbols of the feminine - circles and arches, a stringed musical instrument and the unicorn (perhaps surprisingly, a female symbol). Another smaller canvas portrays the central figure from Unicorn very simply, again with the mandolin. She is my young cousin Kezia, and she holds an instrument which survived the Battle of the Somme along with its owner, our great uncle.

Flute depicts a masked figure playing an invented flute-like instrument which is threaded with a ribbon. The mask implies the sinister and theatrical. My interest in musicians and the theatrical stems from a year in residence with Kent Opera more than 20 years ago, combined more lately with a fascination for Italy and its Commedia dell' Arte. Recent visits to Italy, where I have seen in the original many of the ancient Roman frescoes and the still earlier painting of the Etruscans, have had a profound effect. My response to this ancient art is one of recognition of its startlingly contemporary resonance - a modernity of expression and application of paint which speaks directly across the centuries and which finds echoes in my own work.

Works in this exhibition comprise oil paintings, conte drawings and original digital images, one of which is called Pan - he is shown with a double pipe of clay instead of the traditional pan-pipes. The pipes are ornamented with a skull - endings and beginnings are implied by this and the figure's costume of butterflies. The image was created using computer software which allows me to make images intuitively and fluidly by drawing and painting directly on the computer screen via a graphics tablet. The completed image, which is original and does not exist in any other form, is printed as a limited edition print.

Each picture has had a long period of gestation, especially Unicorn for which I made preparatory drawings, photographs and compositional try-outs on paper and with the computer, while other elements were invented directly on the canvas from the imagination. Novelists often say that the form and purpose of a story can be unclear at its conception, or indeed while it is being written; and similarly when I begin a new composition although I may have a clear idea of its appearance, I rarely know exactly what it is about or where the narrative will lead. My pictures often present images both ambiguous and surreal, which are at the same time very personal. I would say that I only begin to understand them myself some years after they are completed.