Previous
Next
A summary of the artist's career. 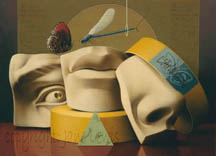 I began drawing at two years old, developing a passion for making pictures which continued throughout my childhood, teenage years and beyond. Leaving home at the age of 17 to attend Hornsey College of Art in London, I discovered I was the youngest student of my year. A difficult time - after a period of disillusionment following my graduation from Hornsey (where I had felt out on a limb in the predominantly non-figurative art school environment of that era) I eventually found my own voice after making a successful application to the Slade School of Art in London. As a postgraduate student at the Slade School I became fascinated by the rich repertory of fine art printmaking and etching in particular, finding a visual form of expression which was true to myself. I drew and etched a great deal, a practice which laid a good foundation for the kind of painting based on observation and invention I would do in the future. I studied under the Portuguese artist Bartolomeu dos Santos, then Head of Printmaking at the Slade and my personal tutor. On graduating I was awarded the Slade Prize - a cash award with which I travelled to Paris with a portfolio of prints and drawings, some of which I sold. I had also acquired an agent, Carol Mann (subsequently a published writer). With Carol’s support I began to exhibit in small London galleries around Chelsea, Bloomsbury and Fitzrovia, and to make modest sales; I also met the actor and mime artist Lindsay Kemp through Carol, the visual impact of whose performances found echoes in my own work. My imagery at this time was severely black and white, and satirically gothic. When a student I had repeatedly visited the British Museum to study the graphic work of Goya, Hogarth, Breugel and the German Expressionists, also Japanese prints. Around this time I also discovered the work of Balthus. I read widely, drew from life and from my imagination, watched the films of Fellini and Fassbinder, and absorbed the music of Kurt Weill, Jacques Brel and jazz. These and many more interests and influences were stirred into the melting pot that evolved into my own style.

I now turned my attention to painting, abandoning etching for a while, and began to work on a fairly small scale in watercolour. My imagery remained fierce and challenging, though by the early 1980s a hint of a more classically influenced calm began to emerge. In 1980 I returned to the Slade School as a full-time Assistant Lecturer where I taught until 1983. As Assistant to Bartolomeu dos Santos, I was encouraged to pursue my own work at the college while at the same time teaching post-graduate students. During those three years I produced a satisfying amount of work in etching and watercolour, that contained detailed and unsettling imagery. I exhibited occasionally at the Curwen Gallery/London (1981-83) and in late 1983 until 1984 I returned to part-time teaching at Harrow and Richmond Colleges of Art, but felt that my vocation did not lie in teaching because I wanted to pursue my original dream, to paint. I decided to earn my living by painting full-time.

An early turning point was when I participated in the ground-breaking exhibition “Women’s Images of Men” at the Institute of Contemporary Arts in London in 1980, which toured through 1981, later showing in its sequel “Pandora’s Box”, at Chisenhale Works Gallery in London and also touring in 1985-86 - both were showcases for contemporary women artists. In that same year, 1985, I became Artist in Residence with Kent Opera, a 12 month residency which introduced me to the life of a touring opera company - I developed a passion and a fascination for the often surreal world of sung theatre. My work took a fresh turn during this significant year, and the anger, satire and grotesquery of my earlier work metamorphosed into a more restrained, though potent, imagery in watercolour, drawing and etching. During 1986-87 I showed the work completed during this residency as a touring exhibition that travelled to twelve galleries in the UK. The Kent Opera residency and its subsequent touring exhibition, along with taking part in the two major London exhibitions gave my work the wider exposure it needed to underwrite my determination to devote all my time to painting.

1986 had seen a further development in my painting - while continuing to paint in watercolour for a while, by now on a larger scale, I began working in oils (largely neglected since my undergraduate years). Oil painting, for me, offered endless possibilities and subtleties, and quickly became my preferred medium.

I was now exhibiting regularly (since 1986) with the Nicholas Treadwell Gallery, with whom I also gained exposure in Amsterdam with Marcus and Marcus Gallery in 1991 - a year in which my work was also featured in "Painting Today", an exhibition and auction at Bonhams of Knightsbridge/London. Sales of my work were now regular and, again in 1991, I was offered a major solo exhibition at Cartwright Hall in Bradford, Yorkshire. The gallery financed the borrowing of pictures from collectors and showed these alongside a selection of work from my studio, both older and recent works, creating an exhibition of pieces spanning some 15 years. It provided an over-view of a considerable body of my own work - one which followed a progression from the early watercolours, the bleak imagery of etchings from the early 1980s, through to more recent subtly subversive figure compositions in oil and in pastel. This exhibition travelled to the Collins Gallery in Glasgow, Scotland in 1992. Also in 1992 I had a solo show at the Strang Print Room at University College London (which houses the University‘s collection of works on paper) of prints, drawings and pastels - mine was their first exhibition of a living artist. Shortly after this I applied for and was awarded a Fellowship in Drawing (1992/93) by the Henry Moore Foundation - during the 12 month Fellowship I produced a new collection of work in pastel, a medium in which I had already developed an interest and which later became an important part of my artistic output. My pastel technique moved away from drawing into pastel-painting. An exhibition of work completed during the Fellowship, showcased at the Rye Art Gallery in Sussex, attracted the attention of the Portal Gallery in London, with whom I have exhibited since 1993 and who have promoted my work in Britain, Europe and the USA.

After a short period when I returned to part-time college teaching in the early 1990s, I continued to paint full-time. 1994 saw my work travel to the Palais Royale/Paris in "Portal Gallery au Palais Royale" which was featured in the arts magazine "Univers des Arts" (Dec1994) and in the same year Obsession Publishing UK (aka Red Dot Gallery) approached me with a view to producing limited edition silk screen prints with me - these have also been promoted by Christies Contemporary Art/London. Then in 1995 the poet Neil Astley, editor of Bloodaxe Books, composed a poem "Bird Woman" inspired by my painting "The Magicians" which appeared on the cover of his poetry collection "Biting my Tongue". Subsequently set to music by composer George Newson, the song was performed at Hastings Museum and Art Gallery in tandem with an exhibition of pictures from the composer's art collection called "Songs in Exchange".

A mature phase of my work began around 1985 - the year in residence with Kent Opera saw a gear-change in imagery and technique and subsequent work has encompassed oil painting, pastel painting, drawing in conte and charcoal, and traditional and digital printmaking. Recent visits to Italy, where I have seen in the original many of the ancient Roman frescoes and the still more ancient painting of the Etruscans, have had a profound effect. My response to this ancient art is one of recognition of its startlingly contemporary resonance - a modernity of expression and application of paint which speaks directly across the centuries and which has found echoes in my own work. But while my working methods and materials could be seen as traditional, I view my subject matter as wide-ranging, challenging and of its time. Some years ago I decided that I would produce technically immaculate paintings which often contain subversive imagery, a paradox at once seducing and challenging the viewer. I take my ideas from my imagination and from anything that catches my eye - I have a collection of objects that have featured, or may feature, in paintings - and I prefer to paint people I know; particularly evocative reading is another source. I paint because it is an obsession, something like a drug, and therefore occasionally exhilarating but more usually a necessity. While my work has been primarily concerned with the human figure, there is often a still life element to the composition, and some of my paintings have explored this theme alone. My pictures are compositions of the imagination, perhaps a modern “vanitas”, a personal interpretation of the allegories of the senses.